Jim Butler Awarded Boss of the Year by Locator UpFront 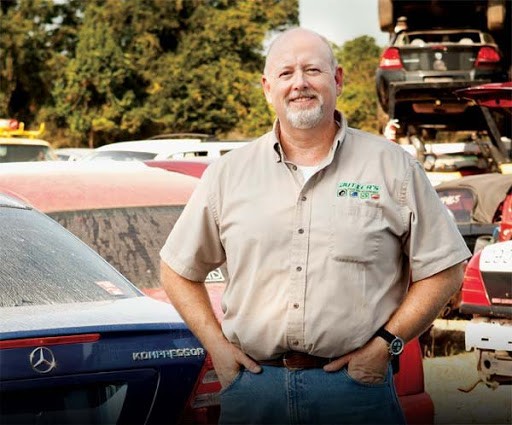 Jim Butler Awarded Boss of the Year by Locator UpFront

Jim Butler has been in the auto recycling industry for decades. He is co-owner of Butler’s Auto Recycling, Inc. in Pensacola, Fla. He’s been an ARA regional director, FADRA president (twice) a two-time Locator Most Influential and he worked with the Florida DEP to start the state’s prestigious Green Yards program. Now, he’s Locator UpFront’s 2013 Boss of the Year.

“My reaction was a combination of surprise and humility,” he admitted. “I remember the first Boss of the Year was Garry Howard, a good friend of mine. (Boss of the year winners) that’s a really prestigious group of people. I never thought I’d be in that group.”

Jim shared that his management style has evolved through the years. Mistakes in the past led him to completely change how he deals with his employees today. He used to devout his time to make sure his employees excelled. When they didn’t, Jim blamed himself.

“I was taking working with my employees personally and it hindered me,” he said. “When they didn’t reach their potential, I felt I’d failed them.” In 2007 the business changed to incorporate more used car and truck sales, and so did Jim’s attitude toward his employees.

Jim acknowledged that passage is true towards his current management style. He focuses on allowing his employees to solve their own problems. He steers them to the solution, that way the employee not only owns the problem, but the solution as well.

“My strengths have come from maturing and taking less of a heavy hand,” Jim acknowledged. “I allow the solutions to come from the employees. There’s only a couple things I have to have my way on, for safety reasons.”

In fact Jim uses a piece of advice from a friend of his who owns horses, “Make the right thing easy and the wrong thing hard and they’ll do the right thing every time.” It’s worked for him in dealing with his employees as well.

When his brother, Mark Butler who is a buyer for the business, wanted to implement a cell phone ban, Jim knew there was a better way.

“‘What are you going to do, stand at the door and frisk them?’ I asked,” Jim remembered. “It’s easier to create a pay plan that gives the employee incentive to work and not be on the phone.” Jim also makes sure employees take the easy, right way when it comes to making sure work orders are correct. 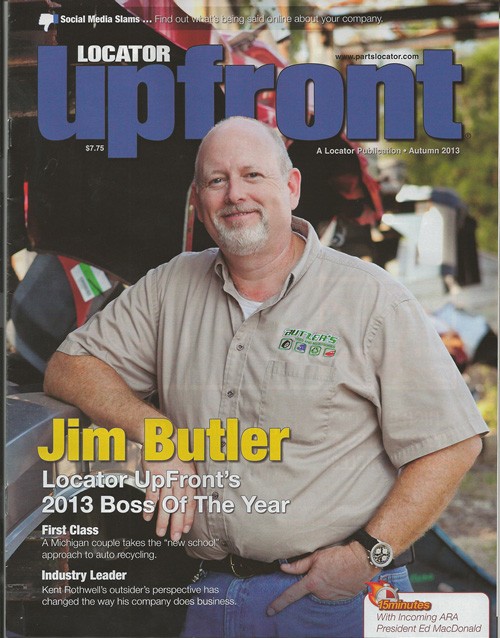 Jim Butler, Boss of the Year

At Butler’s Auto Recycling ( www.butlerautorecycling.com ) the salesperson is responsible for filling out a work order for the dismantling and shipping departments. If the work order is incomplete, Jim asks the salesperson to get off the phone and walk over to the next building to explain the ticket, potentially losing money, instead of just quickly asking them over the phone. Jim explained this also makes the salesperson accountable to fix his or her mistakes.

“I used to have weekly sales meeting, but I just got burned out,” he said. “I started making the salespeople clean up their own messes.”

“Jim is a very good teacher,” stated Darryl McCants, dismantler supervisor. “If you listen to him, you can learn tons of valuable information about the recycling business.

The Butler family has been in the car business since the 1950’s, beginning with Jim’s grandfather. His father, Jack Butler, started Butler Auto Recycling in 1977. Today, Jim is co-owner with his parents, his dad and mom Ruth. The family’s entire business includes the auto recycling division, managed from one prime location, plus a used car lot and a retail store that sells aftermarket parts and tires.

Another one of Jim’s management tactics is to always acknowledge his employees’ accomplishments. “They don’t get to hear enough about the good things they do,” he explained. “For some, coming to work is a high point of their day.”

Comment cards are placed on the sales counter for customer feedback. Jim reads the positive cards at a monthly, employee breakfast meeting. He also allows the employees to fill out cards about each other and reads them as well. Only the positive cards are acknowledged. Anything negative that’s written is dealt with in private with the individual.

“I’ll see many of the employees pin these cards up at their work stations,” said Jim. “That acknowledgment means a lot to them.”

“Jim has created a family-like work atmosphere,” said McCants. “He often states besides our real family, work is where you spend the rest of your time.”

Butler’s Auto Recycling also has a fully-equipped kitchen and dining space that can feed 35 – 40 people, aside from an outdoor space with a grill. The business will sponsor a 4-H animal and Jim cooks it for his employees and their families from time-to-time. He also asks the salespeople to invite three customers to the cookouts to build customer relations.

Eight of Jim’s 26 employees nominated him for Locator UpFront’s Boss of the Year.

“It’s really great when employees take  it upon themselves to do this type of  thing,” said Jim.

“Jim has worked tirelessly all of his life for the betterment of the company, his employees and his community,” said Justin Glass, lead salesman. “He has not received the accolades he has deserved, but never asked for.”